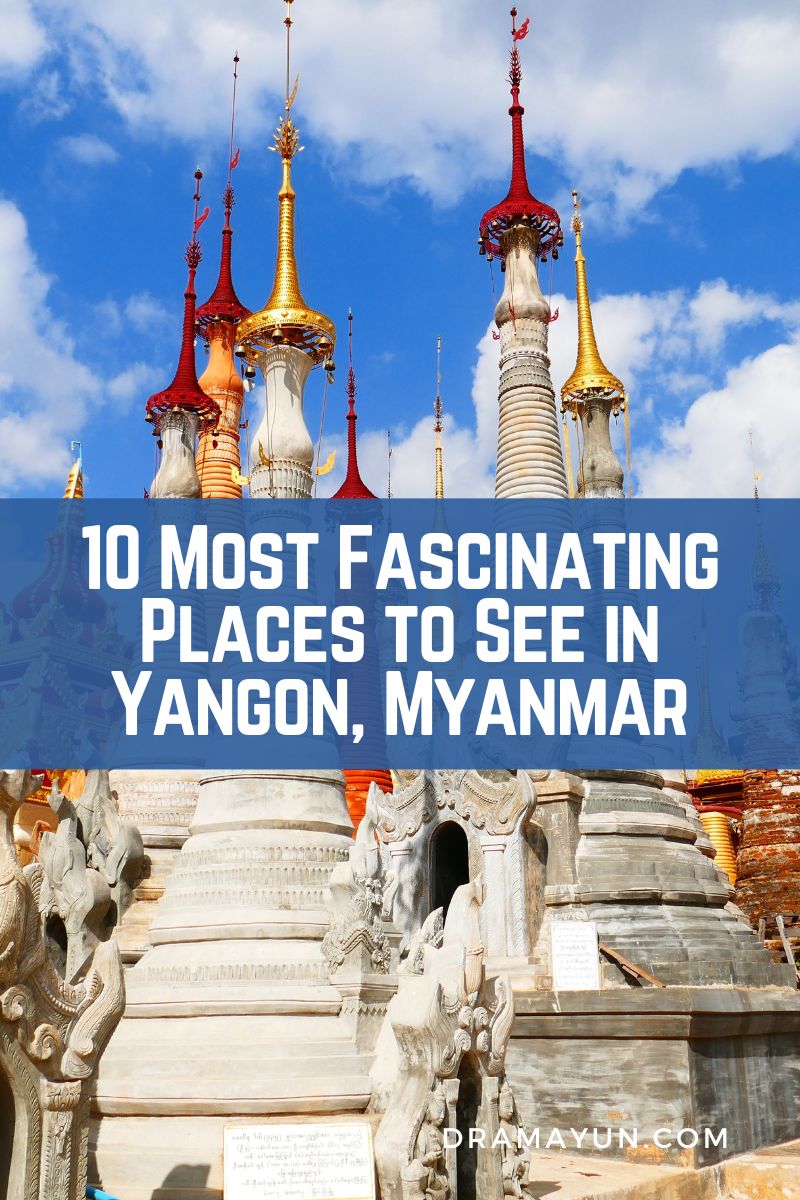 Yangon is the former capital and largest City of Myanmar.  The following is my list of 10 Most Fascinating Places to See in Yangon

The Shwedagon Pagoda has become more than just a landmark but a symbol of Myanmar.  It is said to be the oldest Temple in the world which is about 2500 years old and is made of thousands and thousands of 18k genuine gold plates. The gold plates are cleaned every 5 years. The temple has four entrances. The North, West and South entrances use elevators while in the East entrance, an escalator is used. Entrance fee for foreigner is 5usd. I took the south gate. The elevator is about 5 story-high.  The Swedagon Pagoda is elevated.

Sule Paya is a landmark in downtown Yangon. It is located near the City Hall. It is 2,200 years old. It is said that this temple enshrine Buddha’s hair. The temple is octagonal in shape. Shops surround the temple.

Botatung Paya is located near the Yangon River.  This temple was originally built some 2000 years ago but was completely destroyed during WWII.  It was rebuilt using the same style as the original one.  What is unique with this temple is that the stupas are hallow.  The temple is nothing old nor grand but it is one of Yangon’s 3 major temples.

The City Hall is located opposite of Sule Paya in downtown Yangon.  The building is mainly a British architecture. It is said that the building used to be yellow in color. It is one of Yangon’s famous landmark (apart from the pagodas)

Next to the City Hall is the Immigration Office Building made of yellow and red bricks.  It is said that this building used to be the biggest and most fancy shopping mall in South East Asia.  It is good to see that restoration is on-going in this building.

Chaukhtatyi Paya is the temple of a large reclining Buddha which is 72 meters long.  It is the largest in Myanmar and one of the largest in the world.  What is interesting in this temple is that, names of donors (maybe financial or something) are posted on the walls. Also interesting are the details of the 108 markings in Buddha’s feet.

The Port Area/River Area is a nice place to view local life.  The river is the country’s premier port  handling most of foreign trades.  It is also a nice place to see old ships still used to transport goods and people.

An impressive 17th century Catholic Church made of red bricks.  It was built during the British colonial time. The altar is made of wood.  During my visit, renovation is on going in the main altar.  The church is beautiful inside and out.

This building and the entire complex is no longer in use but restoration is underway.  It is made of red bricks and the design is mainly of British influence.  No one is allowed to enter the complex/building.

Travel back to the 60s-70s in the streets of Yangon.  Taxis (and I mean all) are box type and non aircon and are dilapidated. Buses are likewise the same. It’s interesting to see also that there are NO ATMs (card and machine) in the country. Credit Cards as well are not accepted

EXTRA – EXTRA Places you might be interested to see in Yangon given ample time in this City:

House of Spirits or the Spirits Temple

Temple of the Tooth Relic of Buddha

And there is this circular temple I forgot the name 😦

HOW TO GET TO YANGON:

There is no direct flight from Manila to Yangon. I went to Kuala Lumpur first then took a flight to Yangon. Other option is via Bangkok and Singapore.  All Filipinos are not required to acquire Tourist Visa prior to arrival.